Since 2010, when George Osborne introduced his program of savage 40% cuts to council funding (“austerity”), many councils facing budgetary and cost cutting pressures have peddled the line that due to the severity of the cuts – they have to make “tough choices” in deciding which services to protect, and which to cut.

Councils, on average, receive around 75% of funding from Central Government, and only generate around 25% locally through council tax and business rates.

Whilst Councils have no say over the rates of Central Government grant funding, set each year by the Treasury, councils do directly control the rates and collection of council tax.

Over the weekend, I took a look at council tax rates at the Royal Borough of Kensington and Chelsea (RBKC) over the period of austerity between 2010 and 2017, when IFS figures show RBKC spending on services fell by 36%.

Kensington and Chelsea are not the innocent victims of central Government austerity some might suggest. Instead, council tax data shows RBKC were willing participants in the cuts.

I was shocked to learn RBKC, which forced building contractors to shave £1m off the refurbishment cost of Grenfell Tower and refused use of fire-resistant cladding to save £5000.00 voted to slash council tax income by 21% (or £142.5m) between 2010 and 2017. 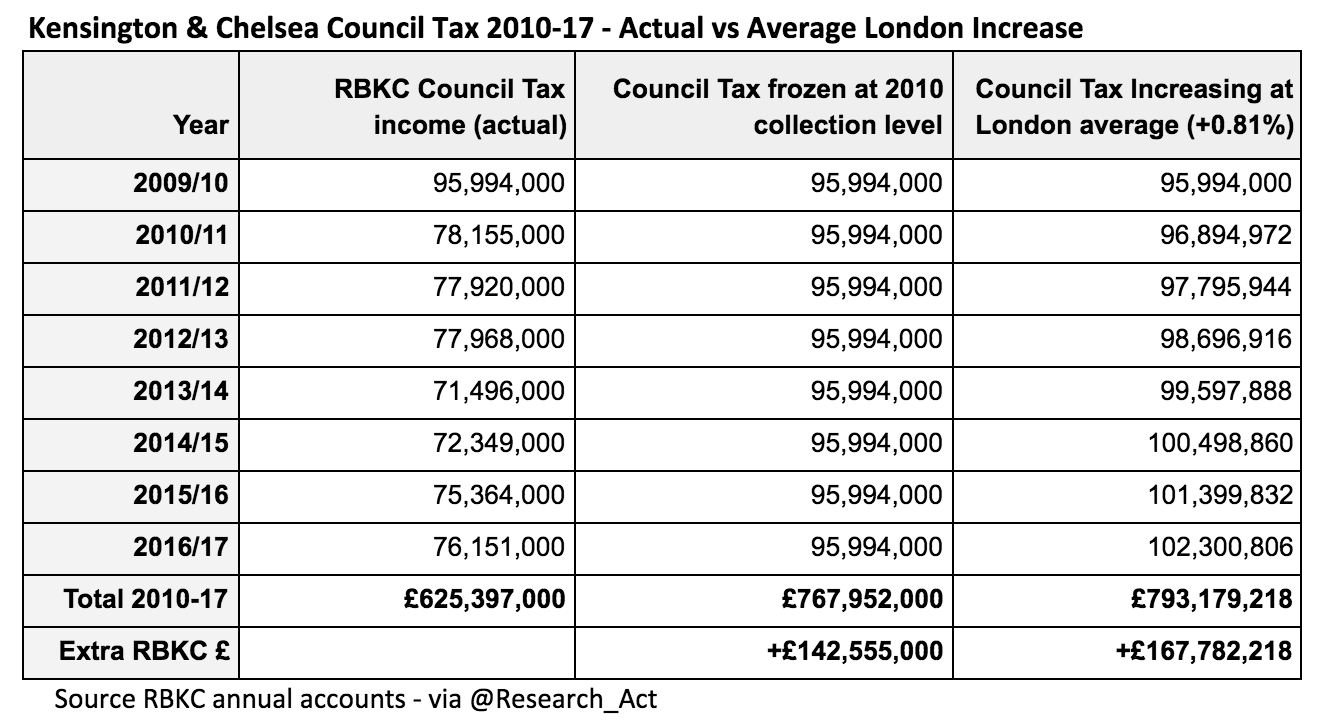 Data on council tax income, obtained from RBKC’s own annual reports suggests the administration and management of RBKC were willing participants in austerity, exacerbating and deepening cuts to staffing and services by choice, rather than protecting council tax income, to offset Government cuts to its budget elsewhere.

Council tax policy changes can be traced back to a 2009/10 crisis era intervention by Cllrs Tom Fairhead (Finance) and leader Merrick Cockell – to award each resident a £50 rebate to encourage retail spending and support charities in the borough.

Following an initial trial, the practice of tax rebates and deliberate council tax cuts became entrenched as an annual “efficiency dividend,” paid to wealthier RBKC residents, as public services were cut or outsourced, and saving realised.

These findings on the extent on self imposed cuts to council tax income, which intentionally deepened austerity, at a time RBKC was offering cash hand outs to wealthy residents – since labelled “blood money“, raise profound questions on the implications of RBKC’s financial management, on service provision and public safety.

Councils like RBKC slashing council tax at a time of austerity are not passive victims of Central Government cuts. They are wilfully engaging in ‘Shock Doctrine‘, further slashing council expenditure, in ways which intentionally punish the poor, while rewarding the rich.

Council tax is a deeply regressive tax, measured on the value of housing, not the incomes and ability of occupants to pay, yet it is one of the few income levers which councils control.

A look at spending figures on services reported  in RBKC’s 2010 and 2017 annual accounts gives some idea of where cuts to service provision resulting from lower council tax and grant income have fallen.

Spending on Planning (-81%), Housing (-76%) and Regulatory (-22%) services have seen some of the largest cuts over this period, where overall spending reduced by 36%.

Had RBKC continued collecting council tax at 2010 levels, or increased council tax rates in line with the average for London Boroughs, RBKC would have had an extra amount between £144,500,000 and £167,728,000 to spend on housing, safety and regulatory enforcement.

Senior members of the RBKC administration must now be asked tough questions regarding why they chose to deepen Central Government cuts by slashing council tax, rather than protecting poorer residents.

Did RBKC conduct an equalities or public safety assessment on the impact of reducing its council tax levels so significantly at a time of austerity – before taking this radical action?

Local government culture has been described as “paternalistic” even “caring” by some sections of the media, yet slashing its own income by £144 million in a time of austerity, demonstrates a cold calculus by RBKC. That the pain felt by local residents, and the blame rightly directed at the council, could be simply redirected back at Central Government.

With RBKC and KCTMO now facing criminal investigation over the Grenfell Tower fire, Councillors and management will have the additional challenge of explaining why £144 million+ was needlessly bled from their own budgets, while skimping and saving on critical safety measures elsewhere, which would have cost less that 1/20th what the Council voted to cut from their council tax income, in a single calendar year.

The question is, will the scope of the Grenfell Tower inquiry led by retired Judge Sir Martin Moore-Bick, be sufficiently broad to consider financial actions taken by council, in the lead up to the Grenfell Tower disaster, or will the inquiry be structured in such a way to obscure cause and effect…