Andrew Bailey, CEO of the Financial Conduct Authority (FCA), fronts the Treasury Select Committee (TSC) 10am on Tuesday to account for the City regulator’s recent performance.

Top of the list of questions for TSC MPs will undoubtedly be the RBS Global Restructuring Group (GRG) scandal, including how the financial regulator has dealt with GRG victims complaints and the delayed RBS GRG s166 report, first commissioned in 2014. An initial summary report, ignoring senior RBS managers’ roles, was released last week.

The MPs ought to ask Andrew Bailey more fundamental questions. Why is the FCA’s Head of Retail Banking Supervision informing RBS GRG victims the FCA is ‘not empowered by Parliament’ to deal with fraud (including file falsification) committed by RBS GRG?

In a recorded meeting at FCA’s Canary Wharf offices between directors of the Serious Banking Complaints Bureau (SBCB), SME Alliance (representing victims of RBS GRG) and the FCA’s Head of Retail Banking Supervision in September 2015, the FCA claimed to not have powers to tackle RBS fraud.

Victims of RBS GRG who suffered at the hands of the bank and additionally had personal data, contracts, files and other documents manipulated by RBS and in some cases, used against them in court (i.e. perjury), are being informed by the FCA to take evidence to the police.

This raises obvious questions for the FCA to be pursued by the Treasury Select Committee:

1. Why does the FCA blame Parliament for lack of powers to act to tackle RBS GRG fraud?

2. The regulator has known of problems within GRG for 10 years, why is this the first time additional powers are requested?

3. Are criminal acts by RBS GRG not covered by the senior managers’ regime – or general anti-abuse and fair dealing FCA principles?

4. Why was the crucial role of senior RBS executives/ managers in the GRG scandal left out of the s.166 summary report?

5. Why is the FCA sending RBS GRG victims to the police – only for the police to state they are not investigating and prosecuting cases of complex financial fraud, sending GRG victims straight back to the regulator?

6. Does any financial regulator or enforcement agency have sufficient powers and resources to investigate and prosecute complex financial frauds? If so, why isn’t it happening?

The FCA’s claims regarding lack of powers to address fraud appear to be contradicted by the FCA’s own website, which states: “fraud falls within the FCA’s objective of reducing the risk of financial crime & also impacts on consumer protection objectives.”

The relevant section of the meeting between the Serious Banking Complaints Bureau (SBCB) and the FCA where fraud investigation and enforcement was discussed was recorded as follows:

FCA – I completely understand where you’re coming from. This is when it’s – the question of the integrity of evidence, and tampering with evidence which I think the allegation is.

SBCB – Yes it is definitely.

So the right channels for you are the justice system through the Police and the Information Commissioner for the SAR. We will absolutely take on what you have said about the complaints handling. It is of concern what you’ve said to us.”

To the casual observer, it must appear entirely nonsensical for the UK financial regulator to lack fraud investigation and enforcement powers just 4 years after the FCA was rebranded and repurposed, following a series of calamitous regulatory failures: the collapse of RBS, HBOS and Northern Rock, followed by LIBOR and Forex rigging 2012-2014 demonstrating fraud by UK regulated banks, on a global scale.

In the wake of publication of the “skilled person” s166 Report into RBS GRG, The FT reported Andrew Bailey “begging for more powers” to implement changes to address failings at the FCA. Bailey said:

“The skilled person that conducted the independent review invited the FCA and other policymakers to consider extending the protections available to SME customers in other ways, in particular for less sophisticated SMEs and vulnerable persons, and to extend the regulations covering unfair contract terms.

“The FCA will make a constructive contribution if invited to do so by lawmakers but ultimately it is for Parliament to consider and approve recommendations about widening our statutory remit.”

Treasury Select Committee members must now establish with Andrew Bailey precisely why the financial regulator has insufficient powers to tackle fraud, ensuring Bailey explains why the regulator did not ask for additional powers when the full extent of GRG fraud and FCA failings became apparent from 2014/15.

Rather than tackle fraud by City of London banks head-on, the FCA’s financial crime/fraud section of its website attempts to reposition fraud as something that happens to regulated finance firms at the hands of ‘rogue employees’ or external fraudsters and scammers.

Despite the litany of recent fraud offences committed by UK banks, the FCA does not entertain the concept of fraud as a crime wilfully committed by firms like RBS and its GRG subsidiary.

“At a time when RBS stands accused of major frauds against SME’s, mortgage and card merchant customers, It’s insensitive at best for the Fraud Advisory Panel to have RBS as the only major bank panel member, especially when the FCA, which is also a panel member, now refuses to publish the long-awaited full 166 report which exposes the behaviour of RBS’s Global Restructuring Group, which formerly the FCA claimed it would publish.

It is disgraceful frankly.”

Instead of a potential perpetrator of fraud to be closely monitored, The FCA view RBS as a “corporate partner” in solving fraud. A trusted member of the ‘Fraud Advisory Panel’ along with the Police, financial consulting and advisory firms, and fraud data sharing experts.

“Given the extent of current litigation alleging fraud involving RBS and their financial advisors KPMG and Security / Surveillance Consultants Kroll, it is wholly inappropriate for these 3 organisations to be corporate members of the Fraud Advisory Panel.“

Despite the promotion of partnership working between enforcement agencies, evidence suggests there is ongoing inter-agency confusion regarding who has the remit and resources to both investigate and prosecute evidence of financial fraud.

The FCA ignore wider problems associated with RBS GRG, file falsification and other frauds which cut across various strands of the regulators remit. Instead, pointing victims towards the City of London Police (CoLP) as lead police force on financial fraud.

Yet CoLP are sending victims back to the FCA, citing “regulatory overlap” and “complexity” as reasons for not pursuing investigations – which would “not necessarily result in a prosecution.” 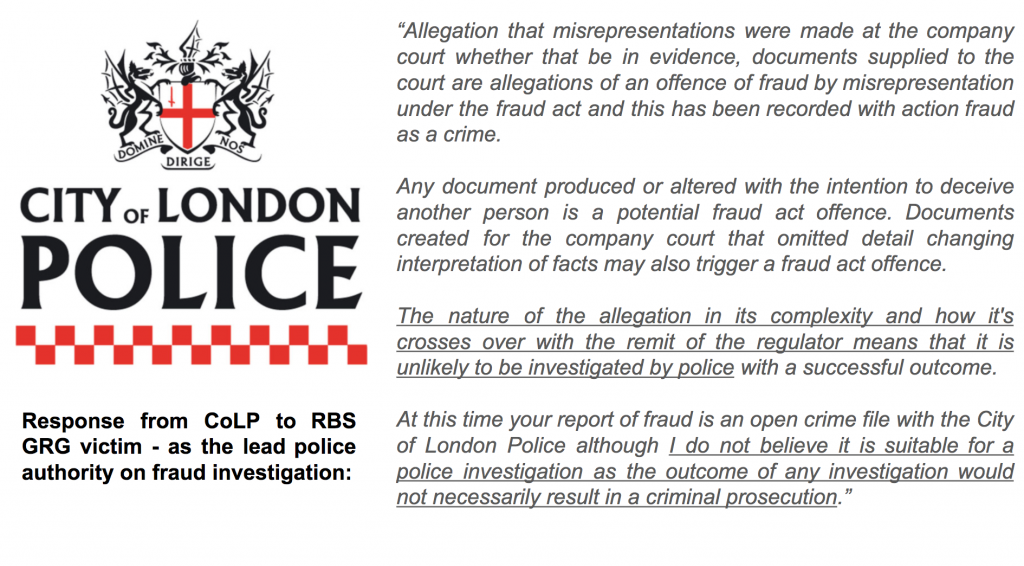 From internal CoLP documents provided to victims, in 2014 – the College of Policing changed the way Police investigate and prosecute financial fraud – the Fraud Investigation Model (FIM). 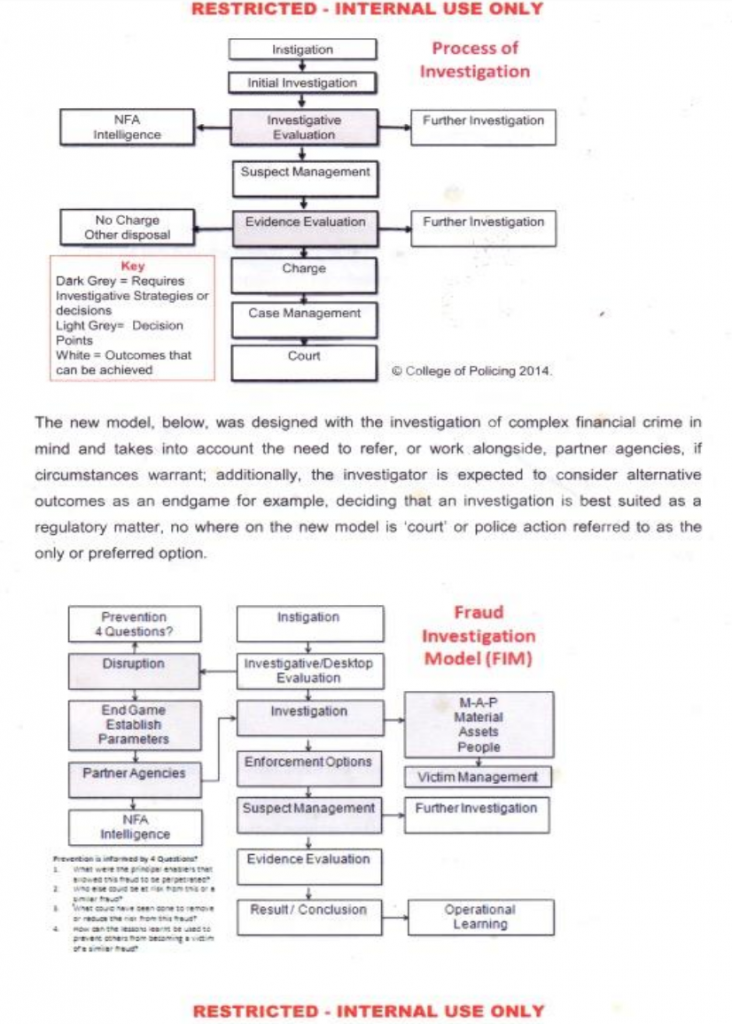 Details of the FIM model were disclosed in response to a complaint to City of London Police by anti-corruption campaigner Nicholas Wilson (fighting for compensation in tens of thousands of cases of store-card debt recovery overcharging by HSBC bank and its solicitors) for CoLP’s refusal to investigate alleged fraud by HSBC.

The FIM documents an apparent shift away from active investigation and prosecution of financial fraud by the police – with talk of “alternative endgames” and “partnership working” replacing “court” or “police action” as preferred outcomes for tackling fraud.

A Freedom of Information (FOI) request has been sent to the City of London Police in order to confirm the origins of the FIM, how broadly the policy has been applied, how closely it is being implemented amongst partner agencies and police across the UK, and to what extent the move away from prosecution and enforcement is being communicated to victims of financial crime.

“Investigations reveal that neither the UK police (including CoLP) nor the FCA has any appetite for investigating financial crime. We currently have a ridiculous situation where complainants who approach the police are routinely told that financial fraud is a matter for the FCA and conversely, the FCA claim they are not empowered to investigate fraud and refer complainants to the police. So financial fraud is allowed to grow like a cancer, with victims powerless against it.

The answer must be a recognised body that will investigate financial crime and prosecute offenders, or all is lost. It could easily be self-funding with the bank fines for personnel found guilty of fraud and other criminal behaviour.”

In response to the apparent decriminalisation of financial fraud by banks including RBS, the FCA, Treasury Select Committee and Parliament must now reconsider the extent to which financial fraud investigation and enforcement can be handballed to under-staffed police forces by the FCA, without any realistic prospects of investigation or prosecutorial success.

Currently, both the FCA and police appear utterly incapable of protecting small businesses from bank fraud.

End Note for Journalists: A full copy of The FCA meeting video complete with transcript is available upon request – via: info@researchforaction.uk at the sole discretion of the source.

One thought on “Why is The FCA Incapable of Protecting Small Business?”